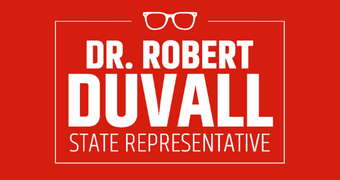 “As an optometrist, I listen to patients about what’s on their minds. We talk about their health, but we also talk about our community,” said Dr. Duvall.

I’m running for State Representative to work for my neighbors and fight for each of them. We need strong conservatives who will stand up and protect what makes Warren and Butler counties such a wonderful place to live, work, and raise a family.”

“We don’t need high taxes, red tape and radical calls to defund the police. Instead, let’s focus on getting Kentuckians back to work, building safe roads and crime-free neighborhoods and helping our kids learn,” Dr. Duvall continued. “That’s what I see for Kentucky’s future. My family and I are ready to make your voice heard in the State House. Visit DuvallForKY.com to learn more and join our team.”

“Robert has what it takes to deliver for Warren and Butler counties in Frankfort,” said Causey. “I’ve met a lot of candidates who make big promises, and I know Robert is the one with the skills and the leadership to get it done. I am proud to join his campaign and look forward to what he can do for our community.”

Dr. Robert Duvall is a strong conservative, with pro-life, pro-Second Amendment and pro-growth beliefs. Robert has practiced optometry in Bowling Green for 26 years. His team has been called the Best Eye Doctors by the Bowling Green Daily News in 2020 and again in 2021.

From early on, Robert knew that education and hard work were the way to a better life. He lived in a mobile home for his first 15 years, watching his father—a World War II veteran—drive a truck and run a small business. His mother worked hard at home to provide for their family. Robert learned the value of a day’s work helping his dad in the family business. Through all the challenges, he always had life’s real essentials: faith, family, and friends.

Robert studied hard at WKU before attending optometry school at the University of Alabama-Birmingham. He returned to Warren County with a conservative vision for its future. Robert has been blessed with a loving wife of 30 years, Amy, and three sons, Alex, Will, and Grayson. The Duvalls attend Living Hope Baptist Church, where Robert has served as deacon chairman and elder chairman. Through his leadership in the church, Robert supported the establishment of the Centers for Hope, a pregnancy and counseling center, and Hope House, which addresses physical and spiritual poverty in the community.

Robert has been a leading conservative voice in the community for more than 20 years. He’s worked hard to elect strong Republicans to local, state and federal office. He’s ready to put his talents to work in Frankfort for Warren and Butler counties and the families who call them home.